Whilst you are staying at Woodlands Cottage, your first visit must be, of course, Treignac. A lively small town with fascinating buildings, pretty old streets and pavement cafes, until recently listed as one of the “Plus beaux Villages de France”. Feast your eyes on the delights of the Borzeix-Besse chocolate shop, where you can arrange to have a tour of the museum and workshop. In the centre of Treignac there is a tourist office where you can arrange guided tours, or set off on your own on the “Circuit du Patrimoine”, a tour through Treignac’s history. 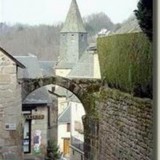 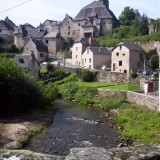 Beside the River Vezere Treignac 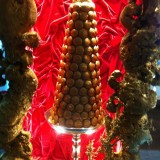 A creation by Borzeix Besse 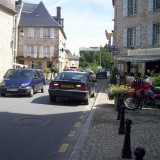 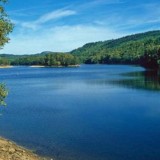 Treignac also boasts its own lake and sandy beach, a magnet for holidaymakers in the summer. The lake is fed by a series of lakes starting high up in the Monedieres. Its worth a drive up to “Suc au May” 908m to see the 360 degrees panoramic view of the green and lush landscape of the Monedieres and Plateau Millevaches. On the way up, stop at the little thatched church in Lestards where the acoustics transform even the worst singers into angels! There are many attractive sleepy villages on route, and stunning views around every corner. 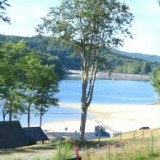 Parapenting at Suc au May 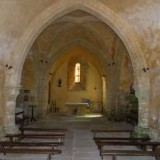 The Limousin boasts six “Plus beaux villages de France”, five of which are in the Correze. Collonges la Rouge,Segur le chateau,Turenne, St Robert and Curemont

Dating from the 8th Century, Collonges la Rouge is a lovely place to explore, as each winding pathway & alley leads to another red sandstone house and pepper-pot tower, or attractive courtyard for alfresco eating and several interesting and inexpensive shops

Nestles in the valley of the Auvezere river that sweeps in a wide curve through the village. Its narrow streets are lined with half timbered houses and turrets. Rich mansions remain from the glorious days of the Royal Court of Justice for Limousin

A pretty village dating back to the 13th Century perched on the edges of a hill overlooking the Limousin countryside. A steep climb but well worth it!

The village is arranged around a Benedictine monastery built by the followers of Saint Robert and was the scene of violent religious clashes. And yet a fine fortified 12th century Romanesque church and stately freestone houses still remain intact from those times in this hilly countryside on the borders of Corrèze and Dordogne.

At the southernmost tip of Corrèze, not far from the Lot, Curemonte stretches out along a ridge overlooking the Sourdoire and Maumont valleys. In addition to the round and square towers of its three castles and its 12th century Romanesque church, the village also has several “noble houses” and a corn exchange dating back to the early 19th century. 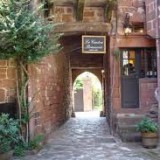 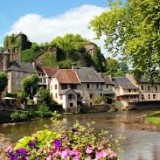 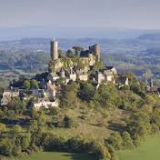 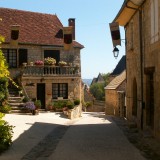 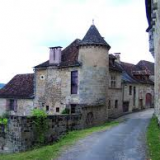